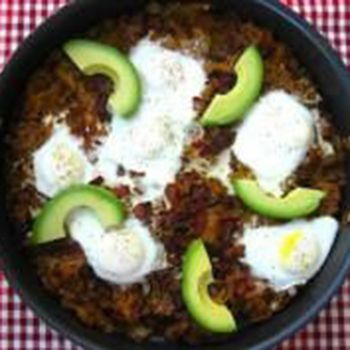 First, put shredded potatoes in a large mixing bowl and squeeze the juice of half a lemon over it (this is to keep them from oxidizing and turning brown).

In a large skillet, cook bacon over medium heat until it is crisp. Remove with a slotted spoon, but keep the fat in the pan. Add the potatoes, onions and bell peppers to the pan and cook in the bacon fat. You will cook this on medium to high heat for 15-18 minutes until the potatoes start to get brown and crispy.

Now pour in Royito’s. Stir and cook for another five minutes until the potatoes have absorbed the hot sauce.

Return the bacon to the skillet and crack your eggs over the top. Turn the heat to low. Cover and cook for another 2-3 minutes until the egg whites are no longer translucent. Top with avocado slices and serve directly from the skillet!